When you look at my article on biophysics, you'll understand that we're addressing "quantum fields" (or biofields, aka the Human Body-Field) that instruct the body on how to build and maintain itself. So when we're talking about quantum scans, we're talking about any kind of technology that assesses these fields so a practitioner can then help to correct them.

I'll point out that therapies like esoteric healing make intuitive assessments of this field (as well as mental, emotional, and perhaps spiritual layers), but I'm referring here to technology-based scans.

Even though several systems out there appear to make quantum assessments,  from my experience you have a few different types of scans, and it's worth knowing what is what.
​

Some scans claim they can scan you from anywhere based on inputting your name and perhaps some other information. I've heard it said that they claim to reach out based on that information and "find" you in the universe to make an assessment. Sounds to me like they generate information either randomly or based on numerology or something along those lines. Maybe this has its value; maybe it doesn't; but this doesn't seem to be an assessment of your all-important quantum field.

If they're not scanning a field, you also run the risk of them being able to show you "getting better" over time because they know it's you when your profile is opened in the future and you're scanned again, giving you a false reason to keep working with this practitioner. As you can tell, I'm not a fan of this approach.

I think "getting better" ought to be assessed by how you feel except when you're going through an initial cleansing or "retracing" period (I'll explain this in an article later) or when you're covering up symptoms with drugs.
​

Some scans are done with "point testing" (also known as electro-dermal screening, or EDS), where a probe is placed against different (energetic) meridian points and a computer assessment is made as to its vitality or balance. I used to own the top of the line equipment (BioMeridian MSAS Professional) and frankly believe that there IS scientific validity to it, but that there are some serious considerations for the practitioner, such as:


I do like this type of system and have no doubt that a good practitioner can get good results. But as you can see, it's not my ideal.
​

(Note that some sources suggest electro-dermal screening, or point testing, is just another name for Galvanic skin response, at least in terms of these types of tests. That may be, but the application is different; here, I'm talking more about a hand cradle with electricity measured at two points on the skin rather than one.)

Some scans use galvanic skin response. This has to do with an electrical signal traveling through the skin. While this tests an electrical aspect of the body (yes, it is quantum in this regard), it is not testing a quantum field. (You couldn't, for instance, hold your hand slightly above the device and get a reading.)

In the mainstream sense, this is used for lie detector tests; but in those tests, it takes several seconds (at least) for a single reading. Health assessments using this may test dozens of items per second. So I don't think we can say this is used in any conventional way.

The claim is that we're looking for stressors -- i.e., differences between the input signal and the output signal when a specific software test is run (for a nutrient, health condition, etc.). In short, it's asking the body how it feels about something, and you need to support those areas that react with stress.

In my mind, this would be similar (but not identical) to muscle testing (as the latter uses no electrical charge). But the "wellness scan" I owned and tested using this technology was easily manipulated. I could manufacture stress responses by moving my fingers during the test. While this was done intentionally, it makes me concerned that even subtle movements by a client would be read as stress responses that have nothing to do with stress.

Therefore, I sold my system and wouldn't personally use this system. I prefer a "field-based" test, where you cannot manipulate things in this way.

What's more, that system allowed you to add new products to the database as possible remedies. So I tested adding a Starbucks "DoubleShot" canned drink into the software, and the software was happy to say that this would balance me and make me healthy. So obviously, not something I can sink my teeth into.
​

Are you a health professional? If so, check out the powerful 60-day trial from NES Health, whose system is described below.
​ 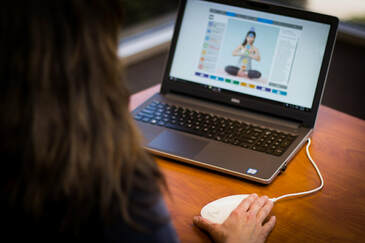 I'm only aware of the BioEnergetiX WellNES System falling into this category, but have no doubt there are others. Here you get a scan of an actual field that penetrates and extends from the body. The hand device you use for the scan can actually pick up your field as you approach it. Sometimes you have to come within a couple millimeters, but it certainly proves that it's not just an electrical scan. It knows that some sort of FIELD is there.

The BioEnergetiX WellNES System (BWS, a product of NES Health) does not diagnose any disease, nor does it assess physical body parts. But it does assess the fields so strongly associated with certain body parts that they get names like "Bone Driver field," etc. Having said that, the Bone Driver field isn't just about the bones themselves. This field has to do with maturing certain blood cells, use of calcium in the body, etc. While ANYONE will get the same reading of a client (I like this objectivity), you can get better and better over time in understanding the readout and knowing the best approach to recommending remedies.

This is more similar to traditional medicine in the sense that a doctor uses an objective test that s/he's not manipulating and then, based on his/her experience is able to interpret what it means and figure out how to address it. Of course they are dissimilar because the BWS scan is not a medical device and isn't making a medical diagnosis.

This scan is NOT repeatable in the traditional sense (nor are several of the others), and I have seen people online saying negative things about it for this reason. Let me say a word about that:

1) Many medical tests are NOT accurate, to the point that they put people's lives at risk. See this NY Times article as an example. It's pretty funny (or sad) how much credibility we give them and how high a standard we think they hold, especially when the answer to these tests is often unnecessary surgeries or pharmaceutical drugs, which are one of the leading causes of death in the United States.

Another article, from Oprah.com, describes how easily some medical tests can be thrown off. For instance, depending on the exact position of your arm, a blood pressure test can be thrown off by as much as 10% and can potentially put you in a different bracket of results, determining what medications you're put on. Whoa, seriously? You're on meds because your arm was in the wrong position? While this is similar to the problem of the GSR type of scan I discussed above, physical position doesn't affect a true quantum scan like ProVision.

2) In my opinion, BWS results ​are repeatable. Eh? You will not get the same results with each scan because there are many factors that go into the state of your "fields"; also because results are based on relative importance of each item in that moment compared to all other aspects of the field. (These are relative rather than absolute readings.) But a qualified practitioner is likely to see consistent patterns revolving around problem areas for their clients. When you know what you're looking at, this becomes an astonishing assessment tool.
​
I'll add a final comment on repeatability with the BioEnergetiX WellNES System: you cannot scan yourself several times in a row and expect to get the same results each time. Again, a point of contention for some people but not for me. Here's why: with BWS, you are testing wave patterns. So imagine you throw a rock into a pond to take a reading of its wave patterns, but then, before the pond has settled back into a calm state, you throw another rock in and take another reading of its wave patterns. You will get completely differently results because now the initial wave pattern is distorted by the second rock that's gotten thrown in. It doesn't make the second reading wrong, but it tells you a totally different story. This is why NES Health recommends taking readings not more than once a week.

Again, seeing repeated patterns over time in a given client has given me plenty of reason to trust its accuracy. And I have challenged this when putting myself and other people I know into different user profiles to ensure that the scan results have nothing to do with past results for a particular client. I've never been able to fool the scan in this way. I have been entirely satisfied about consistent results that match up with people's real world experiences of their health and often with their known medical diagnoses.

Let's put my bias into perspective and leave you with the most important bottom line. I had a financial incentive for all of the devices I bought to work. I didn't want to have to buy more devices, and I wanted to earn my money back after buying them. But the only one I felt comfortable charging people for, based on the quality of the scan, was the BWS. (Actually, it was an earlier version, but BWS does the same thing just with updates.) If I could speak more highly of others I owned, I would. I am no longer offering my services, so I don't have a financial incentive to convince you either way.

Still, I will admit that the true bottom line is how well a practitioner can help someone with a scan. Beautiful scan results -- even if I don't think they're accurate -- might give someone the right incentive to change their lifestyle. A qualified practitioner might know what to give someone even without the scan, using the scan to help with client adherence to a protocol. Whatever works ... works. I just haven't seen reason for faith in most of the devices themselves.

Also, there are always new devices entering the market that may or may not fit any of these categories I've outlined. I believe we're at the dawn of a new era in human wellness and that NES Health will play a role in this alongside others that I hope will break new ground as well.

​Update: all this was written some years prior to 2018, prior to any special bias toward NES Health. In 2018 I was hired by NES Health as their head of training.