After becoming a health professional in 2007, it wasn't long before I was studying glutathione in depth. It is the body's master antioxidant, helping to prevent and delay cellular damage. It runs alongside just a few other elements in the body's built-in (endogenous) antioxidant system. (These are far more important than any antioxidant you could consume.)

According to WebMD, "Glutathione is involved in many processes in the body, including tissue building and repair, making chemicals and proteins needed in the body, and for the immune system." That same page talks about its medical use (via injection) to combat the poisonous effects of chemotherapy and to address a number of other medical conditions.

Produced by the liver to help detox the body, it has been and continues to be studied for a wide range of health benefits. With over 150,000 articles referencing glutathione on the government's National Library of Medicine website (see here), we get a glimpse at its potential power when the body has enough available:


Wondering if increased glutathione (GSH) levels could help with a challenge you're having? Or to help with a virus or other issue? Just search that website to see what scientists are learning.

I could go on all day with its general cleansing and protective and even repairing effects across the body, from the liver to the eyes to the DNA. But in short, you need and want healthy levels of glutathione, and -- unsurprisingly -- it decreases with age.

So how do you go about boosting it?

Yes, there are foods that contain glutathione. (Examples include broccoli, kale, asparagus, avocado, and more.) And there are glutathione supplements. Unfortunately, the body doesn't absorb glutathione from food or supplements well. Far better to produce glutathione, and that's what the Original Glutathione Formula (OGF) is designed to help you do.

I first learned of this product in 2008 under a different brand, and it was remarkable to me for the fact that it had a published clinical study proving its ability to raise the body's glutathione levels by more than 200% in just 60 days. In fact, they took several other measurements as well. Here is the inventor's summary in Anti-Aging Medical News at that time: 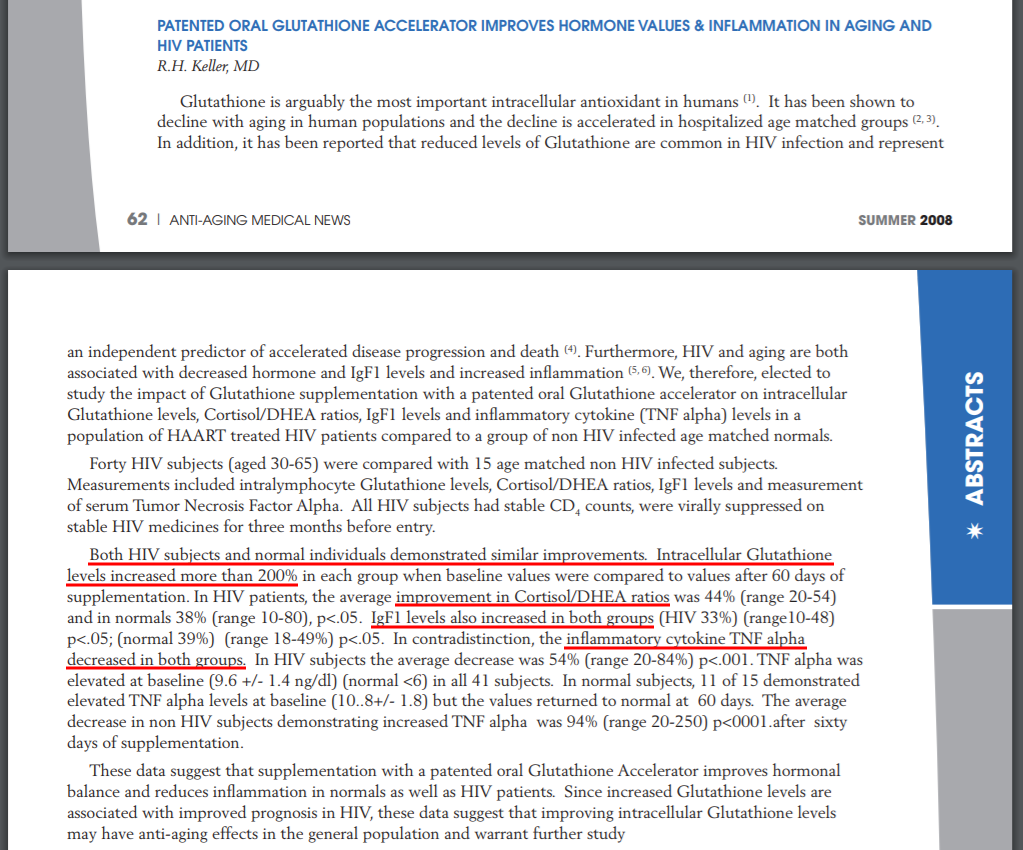 Since I wanted to guide my clients to proven solutions, I loved that the product had this kind of backing, and I began taking it for myself. Although anecdotal, that first winter I found my immune system stronger than it had been in some time; and interestingly, after shoveling my driveway from a heavy snowfall, my muscles weren't sore the next day. I knew how much work I'd done. I knew my muscles should have been sore. I was shocked that they weren't!

Under the original brand, however, I was buying it at $69 per bottle, which felt excessive.

That's why I'm proud to share it now for FAR LESS. The exact same formula under a different brand ... under the name of the original developer!
Boost Your Glutathione!
Click this button to save $20 on your first bottle!